In pursuit of the Review's goal of bringing readers the kaleidoscope of human experience, we offer monthly reviews of works by and for our creative community. Send inquiries about reviewing a work or having a work reviewed to redbranchreview@gmail.com 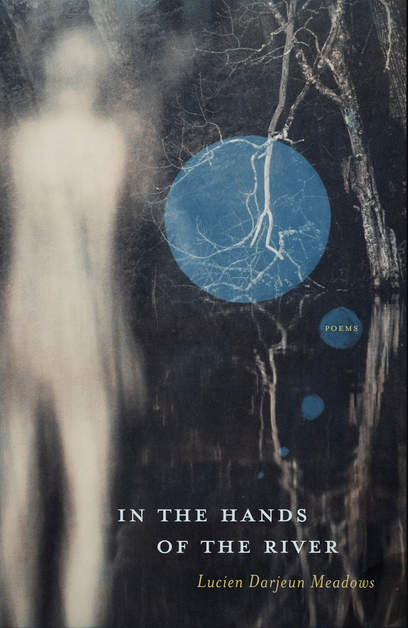 Lucien Darjeun Meadows’ collection of dynamic and mercilessly incisive poems, In the Hands of the River, centers the love a child can have for deeply troubled parents. It’s a truism that “children are resilient,” but beneath this glib acknowledgment that children survive are stories of real kids navigating love for unraveling parents. Those stories, like the one woven by and among these poems, are uniquely gutting. Gestures and luminous images throughout the book reach deep into the liminal space of a child’s growing realization without psychoanalysis or rigidity. They are flexible and graceful, full of desire, starvation, and imagination. They edge warily around catharsis, centering instead images of the fleeting moment and the senses alive within it. In this tender, prismatic debut, the voice of a lost child searches the force and stasis of his love for his mother, father, sister, and lover, always—and this is why the child is still with us—allowing it to move through him, to take him where it will, like the living force it is.

The young son of a Cherokee coal-miner and a mother lost in substance abuse disorder in rural West Virginia, the boy inhabiting these poems navigates parental abandonment, isolation, extreme poverty, and an emerging awareness of a queer identity in a place characterized by cultural whiplash. Where but rural Appalachia is the beauty of “unspoiled nature” marketed alongside the unchecked destruction of that landscape by strip-mining and mountaintop removal? Where else does moralistic old-time religion share such close quarters with the opioid epidemic and its crushing social impact? But Appalachia is not as exceptional as Americans like to think, and the strong young son moving through these poems reminded me of Shuggie, the son of an alcoholic mother in Douglas Stuart’s 2020 Booker winner Shuggie Bain, set in Thatcher-era Glasgow. Both characters, to me, exemplify childhood survival. Like Shuggie, Meadows’ speaker captures spare, precise images of neglect and self-harm, of a young child keeping anxious watch over a sleeping mother’s ragged breathing, of abandonment by a father and first forays into a queer adolescence.
​
Also like Shuggie, the boy’s love for his mother is compassionate and authentic. Their bare, neglected homes are familiar and—if dangerous—known and navigable. It’s so real you feel it in your own chest. A poignant moment glows in “Ruby is Her Birthstone,” when the speaker arrives home in the evening to find his mother passing out near a ruby bracelet and a notepad “with your maiden name / Written over and over” as he remembers her younger self “singing Evita / Through our house” (18) and driving her children an hour to Morgantown to see the show. Evita, the musical about the luckiest rise and most tragic fall of the beautiful, vibrant woman whose desire was endless—whose supercharged ambition couldn’t overcome forces of class and caste—who succumbed to addiction and its physical toll. The speaker’s loving and acute gaze envelops his passed-out mother:
I watch you still, your mouth open.
I unclasp the bracelet, put it around
Your wrist. Breathing loud, your body
A brown honeysuckle left empty
In the sun after a boy pulls the sword
Of long tongue from throat. (19)

Many of my favorite poems from the book engage with Appalachian identities, industries, and places with the sensitive and assured rendering that create a sense of home. I’m excited to read anti-pastoralism and eco-poetics coming from the mountains, and Meadows turns Appalachian exoticism on its head, assigning rural mountain-dwellers every complexity that, it turns out, is the birthright of humanity—even Appalachia. But this is just another of the great collections coming out of Appalachia, these days, for which region is a setting rather than a character or flattened backdrop. In “Because We Want Horses,” a Cherokee father and young son work with neighbors to set fenceposts in concrete, enlivening what could be a classic pastoral scene with a child’s focused interiority. Trim, clean couplets isolate moments of simple sensory pleasure—“As I slip my hands along wire coiled / And waiting, imagine the arc of light”—then drift seamlessly to a future of sensory deprivation, of “Years later in a cold room after I forget / How to smile, eat, speak,” and then tumble back into the luminous present of childhood:
I drop the wire. I run to the hole
My father walks toward, and I jump in,

These arms pressed rigid to my sides, straight
As a post. How I hoped for concrete.

He smells like pennies as he lifts me out,
Swats me with a smile, says Atsutsa, go play. (13)

It’s peculiar, and liberating, to read work born of such tragic neglect and suffering that’s framed in such a simple, active way. These poems are written by a runner, and I knew this before going online to learn more about Meadows: this child survives his childhood not just by the cultivation of intense inner control (self-harm and disordered eating), but by the outward physical act of running, as in “Seventeen”:
Entering the forest is like pushing
Off into sleep—my feet silent on moss,
The cool air I dream a mother’s embrace. (28)
Again and again, the young person inhabiting these poems runs, runs, runs, embodying both an escape from danger and a swirling stasis. A scene of being trapped overnight in a well is repeated in different poems, its horror amplified by the loneliness the boy endures. But if entrapment is a powerful theme here, the image of a river—lifted up in the book’s title—is an equal companion. The final poems, touching on trust-building with a lover, and an acceptance of a father’s absence, open the energy of the collection’s deep love to outflow: the child who survived is running, pushing a cyclic current forward, telling a story of the freedom that love can create. 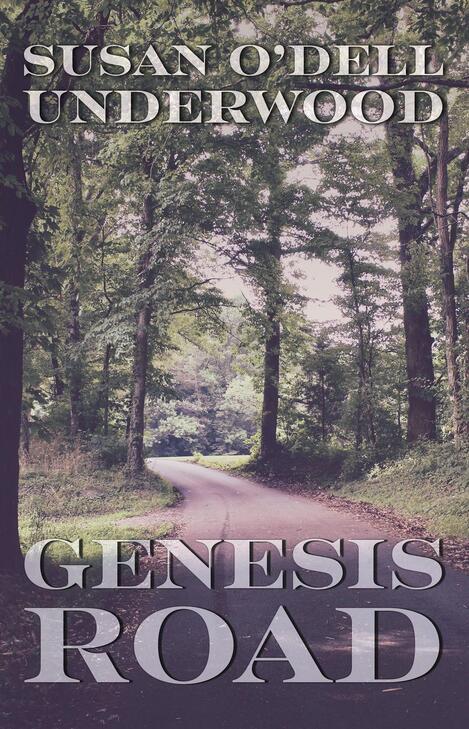 Genesis Road, by Susan Underwood, is an important Appalachian book. Unique in its form and scope, it is a narrative-driven page-turner of almost 350 pages whose action is dislocated from Appalachia but whose characters are profoundly defined by the region and its mores. Part travelogue and part introspection of female grief, Genesis Road offers a contemporary account of the area that is still commonly associated with a poor, rural and devout recluse who is in constant conflict with nature that he equally revers and fears. Instead, in Genesis Road, Appalachia is modernized and its concerns individualized, while the region’s distinctiveness stems as much from its complex past as from the issues that dominate current social and political discourses, ranging from child abuse to motherhood.

Genesis Road begins by seemingly replicating all the main tropes of the regional literature: the narrative is written in first person and by the end of the opening page, there is a death of a child and a parent; there is a burned house, an extensive reference to the Bible and an emphasis on the narrator’s disarrayed life in Newport, Tennessee. But we also learn immediately that Glenna Daniels, the narrator named after her father who wished for a son, suffered and concealed a miscarriage that started a spiral of guilt and sorrow. Glenna’s father, a physically and emotionally abusive parent and husband as well as a petty criminal, who once held a gun to her head, burned Glenna’s house spitefully and negligently. She passionately hates him, but also loves him for all the tender moments of paternal affection. Soon to be a three-time divorcee, Glenna in response quits her job as a social worker in Knoxville, cuts her long, beautiful hair and decides to go on a road trip to the West with her childhood friend, Carey. Carey is a college history professor in Atlanta, gay, and recently widowed; his partner died after a long battle with cancer. Carey effectively masks his own grief with erudition and extreme tolerance for Glenna’s moodiness and silence, which she presents as stoicism typical of Appalachian women. The two became lifelong friends when they recognized each other as outcasts: Carey was tormented for his sexuality, while Glenna was a neglected child. Glenna, though, protected her friend from adolescent bullies and the friendship continued through life challenges and geographical distances. The narrative, therefore, is a combination of self-examination and travel diary through the most famous American national parks and landmarks (Max Patch, the Grand Canyon, Cimmaron Canyon, The Gateway Arch, Yosemite, and Yellowstone, for instance).

While initiated by Carey, the trip “to the end of the world” functions as an escape from Glenna’s personal troubles (all those avoided phone calls in the 1990s!), but also a needed distance from the region that Glenna leaves for the first time at the age of thirty-six. The trip is also—predictably—recuperative and rewarding both for Glenna and Appalachia, which does not seem to be any more exceptionally burdened by poverty, racism, sexism or environmental problems than any other rural part of the US. For instance, in New Mexico, Carey claims “You think the Trail of Tears was bad for the Cherokees. Thousands of Navajos died, too…. But worst of all, he [Kit Carson] destroyed the pride and joy here in the canyon…. Peach trees. Thousands of peach trees. They just hacked them to pieces.” At Georgia O’Keefe’s Ghost Ranch, which turns out to be an animal rescue center, Glenna sees a black bear whose mother was killed by a car. He reminds her, “the first bear I ever saw… trapped like that, in Pigeon Forge to this day businesses use live bears to bait tourists.”

But poetic observations and aphoristic phrases mark Underwood’s realistic prose, as well. She is an established Appalachian poet with three published poetry books, whose “Holler” is still played on Knoxville’s WDVX and is regularly taught in college classrooms. For instance, in Genesis Road, Elvis’ house is “just a subdivision house on steroids,” cows’ tufts behind their ears are “like bad toupees,” while the sunset was “only a failing brightness.” Genesis Road is funny, too, even cynical at moments. One of the most humorous segments is a dinner scene in San Francisco, when Carey’s gay friends entertain the couple. Glenna, who by that point of the novel is riddled with self-doubt and indecisiveness often attributed to her private and regional circumstances, does not become a vocal local patriot only because of her respect for Carey. And that, of course, makes her more refined than her supposedly sophisticated urban host:

“‘Pasta con quattro formaggi.’… ‘Have you ever had it before?’ Marcus asked. I held up my wine glass and prepared to exaggerate my hick accent. Sometimes a situation calls for a hillbilly to mock herself so she can size up others. You stun people, and you can read authentic reactions. But one look at Carey’s hopeful face and I couldn’t bring myself to turn the joke back on them that tempted the tip of my tongue: You really think that we ain’t got mac and cheese in Tennessee?”

Such a sentiment is pronounced in recent books by Appalachian authors. The ecological and feminist concern of the last three decades of the 20th century is refocused on issues of identity, race, sexual orientation, and unsentimental investigations of Appalachia. Authors such as Silas House, Mary Hodges, Rahul Mehta and Frank X Walker have been effectively contesting a reductive view of the region seen as politically conservative and industrially underdeveloped; Underwood’s debut novel not only further diversifies the contemporary literary representation of Appalachia, but it also enriches Appalachian literature with a book that will, for sure, become its staple.